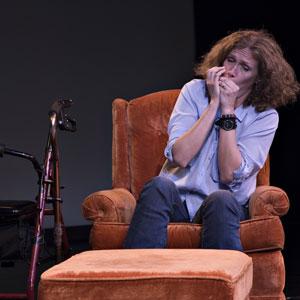 Support Local Arts Coverage at the Fort Worth Star-Telegram and click here to read the review. Thank you!

Nearly three years after actress Sherry Jo Ward had been given an official diagnosis of a rare neuromuscular disease that would alter her life profoundly, she decided to write a play about it. But she gave herself one stipulation.

“Stiff,” which debuted this summer at the Festival of Independent Theatres in Dallas and is making its Tarrant County debut at Stage West on Tuesday nights — ironically during the run of a play called “Life Sucks.” (the period is part of the title) in which Ward also performs — is filled with punchlines and situations that make audiences almost feel guilty for laughing.

The play chronicles her life since her diagnosis of Stiff person syndrome (SPS) — yes, that’s its actual name. According to the National Organization for Rare Disorders, it is an “acquired neurological disorder characterized by progressive muscle stiffness (rigidity) and repeated episodes of painful muscle spasms.” It occurs in 1 in 1 million people; about 300 people in the United States have it. There is no cure, and its causes are still unknown.

For an actor, whose three main tools are body, mind and voice, losing control of one of those is a setback. But somehow Ward, who along with her actor husband, Thomas Ward, have become fixtures on North Texas stages, has continued to work when the role fits and can accommodate the use of a walker. She sometimes teaches introduction to theater at Tarrant County College, South Campus, as well as writing special projects for Dallas Children’s Theater.

“I couldn’t walk away from theater,” she says.

Ward, 44, and Thomas met when they were both undergrad theater students at Abilene Christian University, their first date happening a few days before rehearsals would begin for a production of “Fiddler on the Roof” with him as Tevye and her as his long-suffering wife, Golde. Eventually they moved to Waco when he accepted a teaching position at Baylor University. She also taught.

While there, they both occasionally acted in Dallas-Fort Worth. They moved here when he took a high school teaching job in Keller. In 2014, she started noticing neck and back pain that led to her seeing a series of doctors and neurologists.

Just before they were to reprise their performances in the two-person comedy her husband wrote, “International Falls,” at Stage West in 2014, she got the official diagnosis. “We talked about postponing the production,” Sherry Jo Ward says, “but there was no indication that it would get better.”

She performed that show because her husband was there to catch her if she fell, and he even used her cane for comedic effect. She also spent much of that play in a bed, so that helped.

“I was starting treatment and physical therapy, and taking muscle relaxers, sedatives and pain medicine, and still made it through the production.”

She would soon be cast in the play “Precious Little” at Echo Theatre in Dallas, using her cane. In 2016, she and Thomas wrote a two-person comedy called “I Love You, Honey Bunny,” about a married couple coping with the wife’s new disability and the husband’s job loss, performed at FIT. This year, she was in Circle Theatre’s “Who Am I This Time,” an adaptation of Kurt Vonnegut stories by Aaron Posner.

The hourlong “Stiff” talks about her changing life as an actress, wife and mother, adapting to not driving and using The T’s MITS program, learning to appreciate a legal version of cannabis, and going through physical rehab. All the while keeping the audience in stitches. And it’s quite the workout.

“I wrote into the play moments I knew where I would need a break,” she says. Her director, Marianne Galloway, and assistant director, Jessica Cavanagh, are near the stage to prompt her on lines if she loses track, and help her if her muscles seize and she has to be assisted.

“Stiff” has received such critical acclaim that it has garnered attention from SPS support groups and theaters around the country. Ward says there are plans being made to take it to theaters in Minneapolis, Nashville, St. Louis, and Atlanta, among other places.

“I will do this show until I’m unable to do it, and I don’t want to give it up; I also don’t want anyone else to do it,” she says of the possibility of having it published for performance rights. “I feel like my body is as much a part of the script as the script itself.”