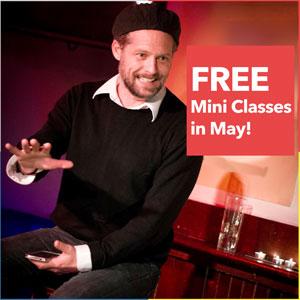 Stage West education courses are a fun and creativity-enhancing way to learn the arts of theater, improvisation, and public speaking! We infuse all of our classes with acting techniques from a variety of sources. Come get hooked on drama!

SOLD OUT | Intro to Voice Acting

SOLD OUT | Intro to Voice Acting

SOLD OUT | Sense Memory: Exploring the Dynamic Potential for Actors

What is sense memory? How do you practice it, and why? In this course, we demystify the method and explore the benefits of this classic Actor’s Studio technique. It is a safe and non-traumatic practice, tapping into the imagination via the senses. Benefits include an emotional connection to the text, in addition to relaxation and focus.

SOLD OUT | The Joy of Creative Writing

We explore approaches to unlocking your inner stories, whether for the sheer joy of creative engagement or with a mind towards publishing. The workshop includes writing exercises and exploration of techniques and theories designed to bring out the writer in you.

SOLD OUT | Uplifting the Spirit through Creativity: A Holistic Approach to Life and Wellness

Beth has a no-pressure recipe for wellness: borrow some acting tools, add useful anxiety-relief techniques, and combine them to create better living strategies through art.  Come get a lift, have some fun, and leave with new tools for challenging times!

Heard a good book lately?  Recording audio books is the consummate voice actor’s job.  Join us to learn about this growing industry and how to thrive in it. Topics will include: creating unique and appealing voice characters, finding the right tone and pace for narration, understanding the particulars of different genres, and making intuitive and smart acting choices. This session will help you become “the Voice of the Author.”

SOLD OUT | The Power and Beauty of Shakespeare’s Language

The May Minis are all free! You're welcome! Express your gratitude in a donation of any size here. Thank you!

Beth Bando Bontley, Education Director
Beth has honed her skills over the decades in all areas of theater. She has acted extensively in NYC and in Boston, where she established her first acting studio. Locally she has performed with Echo, Theater 3, Circle, Runway and Artisan Theaters.  She has taught at TCU, TCC, STAGE, Dallas Summer Musicals, Dallas Children’s Theater and Kids Who Care. Beth earned her BA in Speech and Drama at Trinity University; completed the two year conservatory at Circle in the Square in NYC; and earned her MFA in Interdisciplinary Arts from Goddard College. Her original one woman show, Acet-o-philous or Vinegar Love has been performed at Arts 5th Ave, the United Solo Festival in NYC and the Ft. Worth Fringe. She is also an author and a speaker, devoted to personal and artistic growth.

Rob, a Fort Worth native, is a writer, director, and actor. Rob has spent the last decade teaching for Ft. Worth’s Stage West Theatre, with whom he has co-founded The Summer Conservatory, The Neighborhood Play Contest & The Festival of the Kid. Rob is also the creative writing/acting/improv instructor for Artes de la Rosa’s Artes Academy at the Rose Marine Cultural Center, with whom he has created over 40 original productions for young audiences. As a director, credits include Death of a Salesman, Sam Shepard’s Eyes for Consuela and Waiting for Godot.  Rob is a writer with short stories published in literary journals throughout Texas. His original play, The Breeze Through the Cherry Fields, was recently published by the Langdon Review.

Allison Connor
Allison has been performing and teaching Improv for over 20 years.  She has performed and trained with The Groundlings in L.A., The Second City in Chicago and Gotham City Improv in NYC.  She has taught Improv at The Comedy Store in L.A. and led numerous improvisational workshops for corporations, schools and universities.  She has appeared in many national television commercials and on HBO's improvised hit comedy Curb Your Enthusiasm.

CJ Critt
CJ Critt, an Audie Nominee and one of AudioFile Magazine’s Best Voices of 2008 is known as the original voice of Stephanie Plum, and has voiced the work of Anne Tyler, Larry McMurtry, Patricia Cornwell, Margaret Maron, Haven Kimmel, Joan Hess, and Barbara Kingsolver, in over 160 works of popular fiction for Harper Audio, Recorded Books, Penguin, and BBC America.  CJ is a veteran of film, Broadway, Off Broadway, stand-up and spoken word. She has extensive writing credits, and original works, Suicide at 8 and Smoking Lips debuted at Dallas’ Big D Festival at Theatre Three. CJ’s Cursed with Bigness played in New York, as well as Arts & Letters Live in North Texas. CJ’s website – www.cjcritt.com has numerous audio book samples, reviews and a list of recorded titles.  Her most recent stage appearance was playing Rose, in The Children, by playwright Lucy Kirkwood, in its Southwest Premiere at Stage West.

Chuck Huber
Chuck Huber started acting in Anime in Dragon Ball Z. Since then he has voiced hundreds of characters including Shou Tucker in Full Metal Alchemist and Mohi in One Piece. Video games Chuck has contributed voices for include Borderlands II, Ghostbusters, The Walking Dead, Aeon Flux, Dragon Ball Z, and many more. As a filmmaker Chuck has acted, produced, written or directed for numerous productsions, like Arbor Day - The Musical currently on Amazon Prime. He began acting in Chicago at the Goodman Theater, Court Theater, Steppenwolf Theater after graduating from DePaul University and continues to work on stages in the Dallas/Fort Worth area. On television. he plays Dr. McCoy in Star Trek Continues; Dean Hansen on Season 2 of American Crime on ABC and Detective Swinton in the The Harrowing.

Joanne Zipay
Joanne Zipay founded NYC’s Judith Shakespeare Company in 1995 and served as its Artistic Director for 20 years.  She has taught, directed, dramaturged, and performed in the professional theatre coast-to-coast for over 40 years.  Joanne studied Shakespeare at the Old Globe Theatre/University of San Diego MFA program, and has also studied with John Barton of the RSC.  She has taught students of all ages at institutions including Pace University, City College of NY, Stella Adler Conservatory, Children’s Shakespeare Theatre, Brooklyn Academy of Music, National Shakespeare Conservatory, and Collin College.  This season, she will direct Stage West’s production of Into the Breeches!