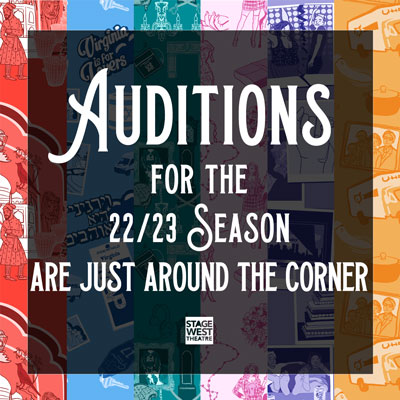 Audition information for our co-production with WaterTower Theatre, The Play That Goes Wrong, is below, along with the sides for auditions. Please read the general requirements.

Actors of all ethnicities and gender identities encouraged to submit. In reference to the character descriptions below—most characters we encounter currently are on the binary and are written with he/him or she/her pronouns and you will see that in the following descriptions. But however limiting the descriptions are, our casting seeks to be as inclusive as possible and we invite gender non-conforming, genderqueer, transgender and non-binary actors to submit for the roles they most identify with. We will also list race/ethnicity when specific to the character but are otherwise seeking all races and ethnicities. Let us know if you have any questions, concerns, or if there are any accommodations we can provide (from language developed by Kevin Kantor and Emily Tarquin from the Actors Theatre of Louisville).
LOCAL DFW ACTORS HIGHLY ENCOURAGED TO SUBMIT

Please provide one of the following upon arrival at auditions with the attendant:

- Proof of full vaccination. “Fully vaccinated”, as defined by the CDC, is more than 14 calendar days following receipt of a final does of an FDA or World Health Organization authorized or approved COVID vaccine.
[OR]
- Proof of a negative PCR test result taken no earlier than 48 hours prior to arrival
[OR]
- Proof of 2 negative antigen test results (e.g., the first taken the night before and the second taken no less than 2 hours) prior to arrival. Results of non-proctored at-home antigen tests will not be accepted.
Stage West will require COVID-19 vaccinations from all artists in the production group. This is a condition of employment. Team members will be required to submit a photo or scan of their vaccination card, including proof of booster.

Masks are required for auditions, except when actively auditioning.

THE PLAY THAT GOES WRONG

Welcome to the opening night of The Murder at Haversham Manor, where things are quickly going from bad to fiasco. With an unconscious leading lady, a corpse that can’t play dead, and actors who trip over everything (including their lines), the whole evening is a disastrous smash. Chock full of mishaps and madcap mania, this classic murder mystery is sure to bring down the house!

Roles:
Annie - Female. 25-40. The company stage manager. She has the biggest journey of any of the characters. When Sandra is indisposed Annie, who cannot bear to be on stage, must step in. Initially terrified by acting, she is willing to kill for it by the end of the play. Her initial terror turns to joy, then to fury. She starts small but grows and grows. Standard American accent.

Trevor - Male. 25-45. The company lighting and sound operator. He simply wants to get on with the show. Curmudgeonly and doesn’t care for actors. He is easily distracted and does many things he shouldn’t, including engaging with the audience. When things go really sideways, he is forced to act in the play. He hates acting. Standard American accent.

Chris - Male. 30-45. The head of the company. High status clown. Rigid, uptight, everything really matters. He is the director of the play and plays Inspector Carter, the esteemed local inspector. this is the biggest day of his life. Everything is riding on this. It is a nerve wracking and exciting night. His pain is evident and every time someone laughs the pain deepens. He has equal amounts of contempt for his fellow actors and the audience watching the play. RP accent.

Jonathan - Male. 25-35. A member of the company. He plays Charles Haversham, the deceased. A bit bland, but sees himself as a James Bond type. Excited and having fun, but not naïve. He technically has to drive the show. He cares about the play, but not to the same extent as the others. Very physical role. RP accent.

Robert - Male. 30-45. A member of the company, plays Thomas Colleymoore, Charles’ old school friend. Wants to be Richard Burton, as evidenced by his declamatory style. He is, however, not a parody of a bad actor. He is unaware of others around him. He does not feel badly when things go wrong and never learns from his mistakes. There is a power struggle between Robert and Chris to be president of the Cornley Poly Drama Society (a position that matters a great deal to Robert). Has real vocal power. RP accent.

Dennis - Male. 25-35. A member of the company, plays Perkins, Charles’ butler. He has no real desire to be involved in the theatre, he just wants to make friends (of which he has none). He believes if he does well in the show, he will be more successful socially. Laughter from the audience is agony for him. He may be slightly oblivious but understands when he gets things wrong. The laugher is a personal tragedy/failure. RP accent.

Max - Male. 25-35. A member of the company, plays Cecil Haversham, Charles’ brother and Arthur the Gardner, the gardener at Haversham Manor. He has never been on stage before. He learned his lines and does exactly what he’s told to do. He has zero connection with any of the other actors, but when he gets a laugh he breaks the 4th wall to engage with the audience. Childlike and naïve. His mistakes are fundamental. he doesn’t think anything through, just looks for approval. RP accent.

Sandra - Female. 25-35. A member of the company, plays Florence Colleymoore, Charles’ fiancée and Thomas’ sister. She is vain and possesses a huge ego. Wants to be loved. Has ambitions to go to Hollywood and will hurt anyone standing in the way of what she wants but is smart enough to stay on the good side of someone who can help her (like the director). You know the type. The stakes are high for her. Very physical role. This role will appear in less than full costume with some sort of underwear revealed - this will not be prurient, but comic. RP accent.

NOTE: One actor has been pre-cast in this production, but will be assigned a role after auditions and callbacks. All roles are available. So those auditioning should feel free to prepare and read for any role of their choosing.

Audition Requirements - AUDITIONS BY APPOINTMENT ONLY!
To make an appointment, please sign up at https://tinyurl.com/yvpkahnv. Auditions will involve cold readings from the script. Auditions will be focused on text and character, and less on the physical business: although it should be noted that this play requires a high level of physical comedy and staged violence and danger. The script is available at the Stage West offices and the WaterTower offices.  Please bring headshot and resume. Please call WaterTower Theatre at 972-450-6232 or Stage West at 817-784-9378 with any questions. Advance perusal of the script is requested.
SIDES AND INFORMATION WILL BE AVAILABLE AT STAGEWEST.ORG/AUDITIONS AND WATERTOWERTHEATRE.ORG/WORK-WITH-US
Video Submission deadline is Friday, July 8, 2022.
Please submit videos and materials using Airtable at the following link: https://airtable.com/shrWvZxmHO44DBZXD

Rehearsals:
Begin at WaterTower on Tuesday, January 10, 2023. Rehearsal schedule is Monday through Saturday with Sundays off
Rehearsal times are Monday through Friday 6:30PM-11:00PM, Saturdays 11:00AM-6:00PM, Sundays off, although there may be slight flexibility.
Pick up rehearsals for performances at Stage West will be February 14 and 15, 2023 from 7p-12a at Stage West. Rehearsal times are subject to change

Stage West and WaterTower Theatre will require COVID-19 vaccinations from all artists in the production group. This is a condition of employment. Team members will be required to submit a photo or scan of their vaccination card, including proof of booster.