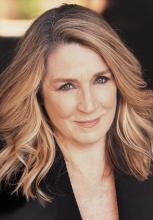 Work at Stage West includes:  Hazel in The Children, Cynthia in Deer, Mrs. Webb in Our Town, Anne in All My Sons, Cecily in The Importance of Being Earnest.
Work outside Stage West includes: Sofia in Dance Nation (RecRoom Arts), Siobhan in The Curious Incident of the Dog in the Night (CityRep, OK), Ilene in Rasheeda Speaking, Caroline in Luna Gale, Patricia in The Taming, Stella in Stella and Lou, Woman in My Name is Asher Lev, Veronica in God of Carnage and Becky in Becky’s New Car (all Circle Theatre), Lady Russell in Persuasion, Marmee in Little Women (both Stolen Shakespeare Guild), “A” in Precious Little (Echo Theatre), Stella Campbell in Dear Liar (Wingspan Theatre), Mercy in Humble Boy and Sitter in The Traveling Lady (WaterTower Theatre), Jane in Absurd Person Singular (Theatre Three), Miriam in Snake in the Grass (Theatre Too), Mary in The Women and Dotty in Noises Off (Contemporary Theatre of Dallas).
Television/Film:  “W,” The Final Semester, Echo 3 and Shadows on the Wall.
Training/Education: BFA in Theatre Performance from Otterbein University and was in the Acting Apprenticeship Company at Actors Theater of Louisville.