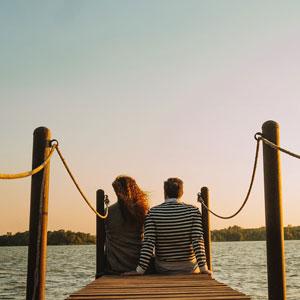 And Then You Die Laughing

Stage West scores with another Aaron Posner riff on Chekhov, this time with Life Sucks., a take on Uncle Vanya.

Read the review at TheaterJones.com

Sonia: “Family, right? It’s like everyone is hard-wired to totally upset everyone else.”

Fort Worth — A shabby little rowboat, dry-docked in the mud, sits at center stage in Stage West’s deeply true and wistfully comic regional premiere of Aaron Posner’s Life Sucks.—and yes, grammar nerds, there’s a period in the title; get over it.

It’s a metaphor, of course.

Despite a gunshot here and there, there’s less fire—but plenty of smolder—in Posner’s second adaptation, a riff on Chekhov’s Uncle Vanya. Life Sucks. is a smoky sigh of ruefulness and regret, a soberly funny meditation on middle age—that time of life when dreams dry up, paths are lost, and ships refuse to come in.

Hence, that rowboat: stuck in the mud, going nowhere fast.

And life sucks. Or does it?

It’s a question you, personally, might have to answer, so be prepared. In Bird, Posner left a few splinters of the fourth wall between actors and audience still standing. Here, there’s no wall at all: the cast members come in talking to us and each other, soliciting opinions, reminding us we’re all together in this, well, Life that we’re living. Director Emily Scott Banks (who directed Bird as well) keeps her cast fully in those moments of communication—nothing feels rushed, and as answers bubble up from the audience, Banks says in her production note, we “change the story just a little bit together each night.”

For both Posner and Chekhov, it seems to be an essential truth that we’re never truly in control of life—and middle age is when we notice it. “You can’t make someone love you,” says one character. “I don’t really want to know that I’m going to die,” says another, annoyed at the “gift” of abstract thought. At moments the cast becomes a chorus calling out things they love or hate in life—and among the hates is “the lie of literature.” Could the “lie” be that in books and plays, love is found, loose ends are tied up, problems solved, conclusions drawn? In life (and Life), not so much.

So—to be, or not to be? One thing’s for sure: we’re going to need some laughs along the way. Chekhov always insisted (often to his own actors) that his plays were comedies. More than a century later Posner is proving the point, by poking a finger into the Chekhovian starter dough and finding all the delicious bits inside.

Circling around the exasperating and resentful Vanya (costumed like a perpetual little boy by designer Aaron Patrick DeClerk) are some fellow travelers who live on or near the estate. There’s his smart niece Sonia (a warm, achingly real Kally Duncan)—tired of people telling her she has “nice eyes,” and Vanya’s boyhood friend Dr. Aster (Jakie Cabe plays half-drunk and intelligent to the hilt)—charismatic, bored, and oblivious to just how entirely Sonia loves him. And there are friends who came to dinner and never left: cozy wise-woman artist Babs (Cindee Mayfield), and not-so-wise Pickles (Sherry Jo Ward), who keeps everyone laughing—but speaks an almost accidental truth now and then. [NOTE: Ward is also performing—in Stage West’s studio space—her award-winning solo show Stiff, an account of her life with a rare neuromuscular disorder.]

It’s a fine ensemble, tuned in to one another, and with one eye always on the “participating” audience. But the emotional life of the play digs deepest in a series of duets between one character and another—or between a character and us. Here’s Babs talking to the lovelorn Sonia:

Sonia: (Incredulous) Is it really that obvious?!?

Babs: …I know you think he is it, The One, The Thing That Could Make Everything Better, but that is almost always a lie….I know it’s nearly impossible to hear what I’m saying, but…I’m right. Move on. The Doctor is Not The Answer.

Sonia: Then…what happens to all that love? To everything I feel…?

Babs: It will move forward. Into the world….I know it’s hard to see when you’re in the middle of it, but this is just a part of the…shape of things. Have a little faith….Move forward. Move further into life.

Life Sucks. inevitably comes up with more questions than answers—but the journey is plenty of fun—and (only a hint, not a spoiler) one character says something to Vanya that the theater-going public’s been waiting more than a century to hear. About Damn Time.

So who knows about life, really? And does it suck…or not?

The answer, as all of us probably knew from the start, isn’t yes, no or maybe, but all of the above. Life does and doesn’t suck, depending on the moment, hour, day…and present company. In Life Sucks. hearts break, love is rejected, friendships are threatened. But some things endure, some are let go, and some people even learn and grow…a little. And life toddles on, their days, like ours, warmed by the friends and family who travel with us.

A hug, a glance, a shared moment—and laughter, whenever possible.

Could the answer be that simple? Nah…but it will do for the moment.

Read the review at TheaterJones.com