"[LIFE SUCKS.] is this strange blend of things that comfort us, and things that let us recognize ourselves." 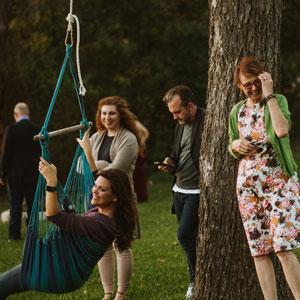 Click here to READ the article at the Star-Telegram & SUPPORT our local newspaper's ARTS coverage!

Despite being more than 100 years in his grave, Anton Chekhov seems to be kind of hot right now.

Two adaptations of works by that great Russian playwright will be seen on local stages this month. Stage West Theatre opens Aaron Posner’s “Life Sucks,” a loose, updated take on Chekhov’s “Uncle Vanya,” on Oct. 12, and a more straightforward version of “The Three Sisters” opens at Stolen Shakespeare Guild on Oct. 20, as half of that company’s annual Classic Fest.

“Life Sucks” comes on the heels of Stage West’s production of Posner’s “Stupid [expletive] Bird” earlier this year. That show, based on Chekhov’s “The Seagull,” was a hit with audiences and critics. It is one of three Chekhov-inspired works by Posner, who is starting work on a fourth one.

These plays are among several new shows based on Chekhov plays that join the unending parade of traditional presentations of his works (especially on college campuses).

Among shows using Chekhov as a starting point are “Vanya and Sonia and Masha and Spike,” the Christopher Durang comedy that won a best play Tony in 2013 (and which Stage West presented in 2015), and “The Plantation,” a reworking of “The Cherry Orchard” that opened in New York a few weeks ago.

Given the intellectual heft of Chekhov, it is ironic to learn that Posner’s relationship with that author started as a joke.

“It was during a conversation at [a theatre where he was directing]. I literally made a joke about doing an adaptation of Chekhov and calling it ‘Stupid [expletive] Bird.’ It was really just a joke, and everybody laughed.

But then, a few minutes later, I thought, ‘Huh, that actually sounds like a lot of fun.’ ”

The success of that effort led him to create “Life Sucks,” based on Chekhov’s “Uncle Vanya.”

“I am big fan of recycled stories and making old versions and new versions bang into one another in interesting ways. People like seeing stories told over in different ways,” says Posner, who is directing a production of “Our Town” at a theater in Olney, Md.

And, when Posner started looking for old and new works to bang together, his background and education took him to Chekhov.

“I was trained on Chekhov. I went to Northwestern University where Chekhov was the center of the training and the theory of that program, so I sort of cut my teeth on Chekhov. And, of course, he sits as the foundation of all realistic drama and realistic acting,” says Posner, whose non-Chekhov plays include “Who Am I This Time?” (an adaptation of stories by Kurt Vonnegut Jr.) and “My Name Is Asher Lev” (an adaptation of the novel by Chaim Potok), which have been presented locally by Circle Theatre.

And Posner seems to be doing well with his adaptations.

“I feel very fortunate. I have about 50 productions of maybe half a dozen different plays of mine around the country and around the world this year,” he says.

And Chekhov has a lot to do with that success, even though Posner is not primarily concerned with being directly faithful to that Russian master when he writes plays like “Bird” and “Life Sucks.”

“I have a great love for the radical direction he took. But there is also a sort of discomfort with the fact that what had once been radical or even revolutionary has now been imitated by virtually everybody for 100 years or more. So now it seems almost cliché,” Posner says.

“So Chekhov is my launching pad. I was not thinking about him very much at all during the writing of “Stupid [expletive] Bird” and “Life Sucks.”

The good news there is that you don’t have to be a Chekhov scholar to enjoy “Life Sucks,” which has a contemporary setting and often has its characters break “the fourth wall” by speaking directly to the audience.

“If you know ‘Uncle Vanya’ well, there are some pleasures in comparisons. But I don’t think most theater audiences know Chekhov like theater people do. I always assume that nobody in my audience knows the original. You don’t need to know anything about ‘Uncle Vanya’ to enjoy ‘Life Sucks,’ ” Posner says.

So while Posner attempts to bring Chekhov’s observations on the human condition into the present, Steven Young, who is directing a traditional version of “The Three Sisters” at Stolen Shakespeare Guild, is concerned with making the original material more meaningful for today’s audiences.

“I think that some adaptations of Chekhov’s plays feel a bit stilted. Many of them have an Etonian quality, and they wind up sounding more English than Russian,” says Young, who has done his own adaptation of the play for this production. “Because it hasn’t been done in the DFW area a lot, I wanted it to flow off the tongue easily.”

Posner and Young are trying to make Chekhov more accessible for a wider audience.

“Chekhov can be quite inaccessible. It can be incredible, but it is very, very hard,” Posner says. “And to do a Chekhov play brilliantly is about as hard as it gets.

Chekhov (1860-1904) is considered to be to one of Russia’s greatest literary figures, known for both his plays and short stories. But his carefully structured works, with their yearning, struggling characters, can be a bit of a challenge for some.

So Young is among those who praises Posner’s efforts to make Chekhov a little more user-friendly.

“I think plays like [Posner’s adaptations] are a great thing because they bring modern audiences back to the original, and piques their interest in seeing these works,” says Young, who has an extensive history of performing and directing Chekhov.

Back at Stage West, “Life Sucks” director Emily Scott Banks, who also directed that company’s production of “Stupid [expletive] Bird,” is concerned with keeping it real.

“I feel that some of his characters could actually be seen as real people,” Banks says. “This play is this strange blend of things that comfort us, and things that let us recognize ourselves.”

And, in that regard, Posner’s channeling of Chekhov speaks to our times.

“I think we are coming to a new place where people are willing to look at themselves being reflected back at them from the stage. And that is perfectly Chekhovian,” says Dana Schultes, the executive producer at Stage West who selected these Posner shows and who hopes to eventually produce them all at her theater.

“I think we appreciate a darker more complex style of humor right now, where maybe we can laugh at ourselves a little bit more, and things don’t have to be quite so sanitized or safe,” says Banks, adding that she especially hopes her direction highlights the comic touches in Posner’s script.

And it is often easy to laugh at Posner’s works, starting with his titles. His choice of a title for “Bird” is obvious, as is the choice of “No Sisters” for his version of “The Three Sisters.” But, while “Life Sucks” has a funny ring to it, it does not immediately reveal the play that inspired Posner’s re-imagining.

So why did Posner choose that title? Is it a summation of the world views of Chekhov’s characters? Is it a reflection of Posner’s own outlook on life? Is it some obscure reference to a footnote of Chekhov’s short life or great works?

“I would be lying if I told you I could remember why I chose that title,” says Posner, with a degree of honesty that is, well, downright Chekhovian.

Read it at the Star-Telegram