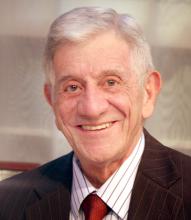 Founder/Director Emeritus, 1936-2013. Jerry's professional career encompassed more than a hundred stage roles and an equal number of directing credits over the years. As founder and producing director of Stage West, much of his work was here, but he also performed with Casa Manana, Dallas Repertory Theater, Shakespeare-in-the-Park, Contemporary Theatre of Dallas, Lyric Stage, the Dallas Theater Center and the Pittsburgh Public Theater. Significant roles included Tupolski in The Pillowman, El Gallo in The Fantasticks, Teach in American Buffalo, Lear in King Lear, George in Who’s Afraid of Virginia Woolf, The Common Man in A Man For All Seasons, Marquis de Sade in Quills, Roy Cohn in Angels In America, Part I & II, Mr. Green in Visiting Mr. Green, and The Stage Manager in Our Town. Recent credits included Clarence Darrow for the Defense, Mr. Maraczek in She Loves Me and Dr. Rance in What the Butler Saw, and direction of Thank You, Jeeves. He also wrote a special adaptation of Macbeth for Performing Arts Fort Worth. Mr. Russell was recognized as Best Actor of 2005 by The Dallas Morning News and received the 2006 Best Actor award from the Dallas Theater League for his performance in Visiting Mr. Green. He was much loved by artists and community members and is still regularly remembered in conversations in and about Stage West.