from Fort Worth Report by Marcheta Fornoff, January 9, 2023 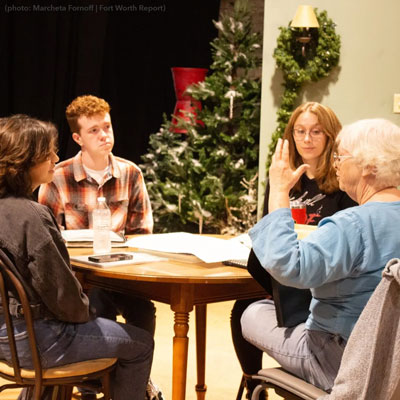 Clare Floyd DeVries has designed real-life fire stations, doctor’s offices and a string of small-town convenience stores, but for the better part of 20 years she’s crafted full environments from scratch in her role as one of the metroplex’s go-to set designers.

Now the architect-turned-set-designer is helping build the next generation of theater professionals as a mentor for Stage West Theatre’s apprenticeship program.

The idea for the program grew out of the COVID-19 shutdown and a desire to “double down” on diversity, equity and inclusion efforts following the wave of Black Lives Matter protests, said Dana Schultes, the theater’s executive producer.

“We made a commitment to ourselves and to the larger theater community that we would work harder to raise our standards so that more and more people from diverse communities were participating in the creation of shows,” she said.

In order to deliver on that promise, they started a paid apprenticeship program to help unclog the talent pipeline.

The program has separate tracks for separate disciplines. This year, there are three sets of three students matched with a mentor in either sound, costume or scenic design.

Mentors are tasked with helping students understand the full scope of what they do for a show, from pre-production meetings through completion and all of the various steps in between.

“One of the things that I noticed about my own educational experience is that when I matriculated, I was not sure what to do next, and it was really intimidating,” Schultes said. “The ultimate goal is for these young students to not only learn from the best, but then to have opportunities to then do their own shows with the mentors watching after them, to say, ‘I’m here for you if you have any questions.’”

Aaron Knowles Dias, education director for the theater, took the reins for the program this year. Finding mentors who are at the top of their field and great teachers was a priority for Knowles Dias, and she said Floyd DeVries is the perfect example of someone who embodies both qualities.

“She’s really a master of bringing other people into that artistic process so that they can access it themselves,” she said. “The artistic process, even for artists themselves, is very mysterious … But she’s got that awareness of the process and has a really great vocabulary for sharing it with others. And it’s just wonderful.”

Katie Cooley, who is studying theater design and technology at the University of Texas at Arlington, arrived at the theater early and had the chance to go over tips for perspective drawing before the first session officially began.

Over the course of the morning and after the other students arrived, Floyd DeVries shared several valuable lessons about what goes into creating a believable set: from problem solving practical needs — like creating pieces that can easily be manipulated or moved — to the more theoretical but equally important questions about using design to match the tone of a play.

For example, several plays might be set in a similar time or place, but the design will vary drastically depending on the intended occupants.

“Whose study is it? Is it Sherlock Holmes? Is it Dr. Jekyll? The White Rabbit (from “Alice in Wonderland”)? Professor Higgins from “My Fair Lady”? Those rooms are all rather different because they have such different personalities,” she explained. “So you have to become a bit of a psychologist.”

Sierra Lesniak, a student at Tarrant County College, plans to be a director someday, but is still deciding whether she wants to work in film or in stage plays. In either medium, she said it will be helpful for her to have a background in scenic design and learn strategies for communicating her visions to others.

“Working on a show, you break it down from what’s necessary … And then once you have your foundation, you build into the artistic side,” she said. “So getting to learn the technicalities from the perspective of a scenic designer … to have that under my belt as a director … I’m very excited because the more that I can understand everybody’s positions as a director, I think would build me up to be better at my job.”

Fellow apprentice Brooks Davenport is a theater design and technology major student at Texas Christian University. He is excited about the opportunity to plug into the local theater scene and get experience outside of school.

“I feel like this is a space where I think I can have a lot of creative freedom,” he said. “I don’t know how to explain it, but I feel like there’s a difference in being at school and in a classroom and being in a professional environment. I feel like I will be able to explore and experiment a lot designing here.”

Each of the different disciplines for the apprenticeship program run on their own schedule, but all three tracks will come together in May for a celebration, where the students will each have the opportunity to share what they learned. The program enables growth for both the theater and the students, Knowles Dias, the education coordinator, said.

“We are investing in these artists-in-development now so that they will invest in us tomorrow,” she said. “The way we see it, by bringing them into the Stage West fold and supporting them and nourishing them here, giving them great training and sending them off into the world to find their way and grow in experience, skill and success, we are empowering them to be the torch bearers for local theater down the road.”