John Garcia's The Column review: GUARDS AT THE TAJ 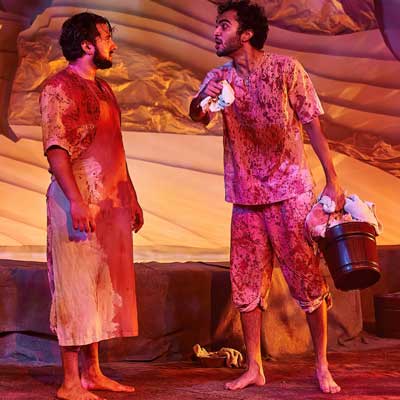 The Taj Mahal in the city of Agra located in the Indian state of Uttar Pradesh is a work of timeless beauty. Commissioned in 1631 by the Mughal emperor Shah Jahan to house the tomb of his favorite wife. Construction began in 1632 with the mausoleum being completed in 1648 and five additional years saw the completion of the surrounding buildings and gardens. A wall was erected around the area during construction making the site a virtual city inside the city of Agra, housing, at one point, as many as 20,000 workers. As is the case with many iconic structures, myths have risen around the building of the Taj Mahal, some of them about the mutilation of the workers so that they would never be able to build anything so beautiful again.

It is one of these myths that propel playwright Rajiv Joseph’s script “Guards at the Taj,” and Stage West Theatre has produced it with power, grace, and a melancholy beauty worthy of the Taj Mahal itself. The play’s reveries on art, invention, and friendship, its musings about power and who has the aesthetic and personal last word in the world, and even its brutality, betrayal, and loss are rendered with care and precision by director Shyama Nithiananda and her wonderful cast of two, Rahul Joshi and Dhruv Ravi. Director and actors have given us work, though difficult to sit through at times, which delivers emotional impact and leaves the audience with a lot to ponder and talk about on the way home. And that is what great theatre does.

Rajiv Joseph transports us to the year 1648, the year the mausoleum is revealed to the public. The encircling wall keeps the building from being fully viewed and two guards of low status, Humayun (Rahul Joshi) and Babur (Dhruv Ravi) face away from the Taj Mahal so that no one may see it before the emperor. The two men are lifelong friends. Humayun is all business as they keep watch during the hours before dawn. Being the son of the head of the Guard who looks down on him, Humayun is all about maintaining silence and military discipline. But his hardness softens under the spell of his talkative friend.

Babur asks about the identity of the birdcalls echoing around them and speculates on the beauty of the building they are securing and dreams about being assigned to protect the royal harem. He concocts fantastic inventions in his mind, like a platform that can fly through the sky so you can visit the nearest star. All of this draws Humayun into reveries of his own and the two men talk until dawn about beauty and events in their shared history until the morning light reveals the splendor of the building behind them. It is then that Humayun tells Babur what they have been assigned to do to ensure that such a work of beauty will never be built again. As they turn to view the building they have been forbidden to see, the two friends are gripped by the horror of the duty that awaits them.

It is this act that drives the remainder of the play. And it is here that the actors Rahul Joshi and Dhruv Ravi excel in showing how the two men cope with the pain and anguish they have wrought. Expertly guided by director Shyama Nithiananda, they show Humayun and Babur struggling to imagine what kind of future is in store for them after what they have done. Will they advance as soldiers? Will their friendship hold in the face of political and familial obligations? And what if, as Babur fears, they have destroyed beauty itself? The cast wrestles with these questions with skill and emotional authenticity.

The Jerry Russell Stage has been transported to ancient India, with intricately decorated panels looming in the predawn light (thanks to set designer Brian Clinnin and the lighting design of Bryan Stevenson). When the panels slide away, we are taken to a cave with a stream running through it, which serves as a dungeon and also the arena where Humayun and Babur conduct their orders. Amy Poe’s costumes ably reflect the historical period and very simply suggest the characters’ rank as soldiers. For the sound design, particularly the sounds of water in the cave and a moment when hundreds of birds are startled into flight, Ryan Simón is to be commended for his work. I also want to acknowledge Lynn Lovett for excellent work with set décor and props, especially the ability to find an especially large quantity of a certain prop. You’ll know when you see it.

Rahul Joshi gives us the portrayal of a man torn in many directions. His Humayun finds his loyalty to his friend, his loyalty to his emperor, and his loyalty to the father who despises him are all in conflict and only one can prevail. Mr. Joshi shows the character’s desire to please authority, his face set in soldierly solemnity. But then his features melt to rapturous joy when talking with Babur about inventions and sleeping on sandalwood platforms in the trees and all of the things that bring him joy that his father views as weaknesses in him. Mr. Joshi gives a multi-dimensional performance of a man who faces a future where beauty and pain are inextricably linked.

Babur is the dreamer and philosopher of the pair, and Dhruv Ravi gives him a wistful edge while still being anchored in reality. Even when immersed in cruel conditions, Babur remains hopeful about what is to come. But his brutal actions have warped his dreams, his wonderful inventions becoming instruments of destruction and Mr. Ravi makes all of this credible. In the beginning, his character is like a chatty little kid. But Babur eventually wants to reject all authority which leads him to say things that he can never take back. Mr. Ravi’s journey as Babur is both a joy and heartbreaking to behold.

There is so much in this play. Ravi Joseph’s script wrestles with the meaning of art and beauty, the price of loyalty, the tyranny of authority and so much more. Stage West Theatre has given us a production of magnificence and power and one that you will remember and discuss long after the audience lights have come up. So, do yourself a favor and head over to Fort Worth to witness a true vision of beauty amid this troubled world, “Guards at the Taj.”