KERA News: WHAT TO SEND UP WHEN IT GOES DOWN | Stage West Theatre | Fort Worth, Texas
Skip to main content

KERA News: WHAT TO SEND UP WHEN IT GOES DOWN 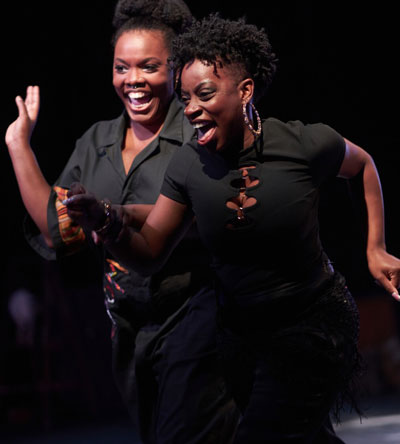 Atatiana Jefferson. Botham Jean. Breonna Taylor: The list of Black people killed by police goes on. In response, Stage West is offering What to Send Up When It Goes Down — an angry, cathartic and wildly inventive play that's getting its Texas premiere in Fort Worth.

In the lobby of Stage West, performer Sky Williams started What to Send Up by addressing the audience about Black people being shot to death -- with little or no accountability.

"The emotional and physiological toll of this concerns us and is the reason for this ritual," Williams announced. "Let me be clear: This ritual is first and foremost for Black people. Again, we are glad that non-Black people are here. We welcome you. But this piece was created and is expressed with Black folks in mind."

What to Send Up contains raucous comedy and wrenching scenes of loss. But early on, we're told it also includes audience participation -- and that's enough for some theatergoers to wonder: Just how confrontational does this get?

In an interview, Williams said that when she starts speaking in the lobby, she can sense these flickers of discomfort -- especially in white but even in some Black theatergoers.

"They're like, 'We're gonna keep watching but we're not sure what it's going to be' - which I think is kind of fantastic."

Once we were all inside the theater, performer Raven Lawes took charge, inviting the audience to stand in a circle — then she started asking us increasingly pointed questions.

Lawes asked us to let all that sink in -- the numbers of people who'd stepped forward.

Audience member Meghan Glovier is white, in her sixties and lives in Fort Worth. She said she's participated in racial equity excercises at her office, so she was familiar with these kinds of questions — and the pain that motivates them.

Even so, standing in a theater with people she didn't know -- "yeah, there were moments, y'know, of anxiety," she said. "It definitely yielded some reflections."

Keneisha Thompson is an Arlington Black woman in her thirties. To her, What to Send Up felt like a rarity, a relief — the show created a safe, public space, open to whites and Blacks, but one where she nonetheless didn't feel like an outsider.

"I've often been in spaces where I was the only Black person. And there is a feeling of needing to adjust who you are," Thompson said. "And with this particular show, I felt seen and validated -- and that I'm not alone in these experiences."

Playwright Aleshea Harris has called her 2016 play a "ritual-pageant-performance-homegoing-celebration." In it, she takes dead aim at provocation. One character (Lee Walter) delivers a somber monologue about a love that's fallen apart in bleak frustration — it's clearly a reference to the white race.

But Harris also aims for wicked, satiric humor. One Black man (Djore Nance) warns a younger one (Jonah Munroe) about walking so "brazenly" in white neighborhoods — he mocks his clueless, chest-out, arms-pumping stride. He's going to get himself killed like that. A Black office worker (Brittney Bluitt) has a white manager who claims he simply doesn't see color. She snatched the mouth right off his face.

Directed by vickie washington, What to Send Up even features exultant singing, dancing, stomping and clapping.

As Sky Williams put it: "Black rage lives within every single one of us. But so does Black joy, Black resilience."

In fact, audience member Meghan Glovier said, as angry as it is, the performance of What to Send Up offers what she called "the grace" of humor.

"I felt privileged to be invited in," she said. "They give us so much room to join them to acknowledge racism."

Brentom Jackson, a Black Fort Worth native in his 30s, said all this contributes to the sense of powerful, painful emotions being worked through -- as in a ritual.

"Yeah, so it becomes a lot more of an uplifting experience."

It's a ritual that combines a funeral with a dance party.