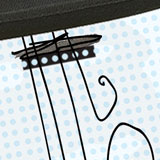 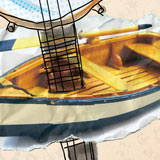 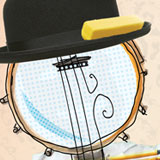 Bertie Wooster and his faithful servant Jeeves return with a full cast of characters, including tyrannical relatives, beastly acquaintances, demon children, and a banjolele.  Bertie has taken up an irritating new hobby which drives Jeeves to resign.  Bertie, in true fashion, gets caught up in a mass of entanglements, and fearsome complications develop.  But will Jeeves be there this time to save the day?

a connoisseur's delight sure to cure even the worst case of Downton Abbey doldrums...

Pelham Grenville Wodehouse was born in Guildford, Surrey, in 1881, and educated at Dulwich College.  He abandoned a career in banking in Hong Kong to begin writing, publishing his first novel in 1902.  His short stories were published extensively in Punch and Strand Magazine, establishing him as one of the most widely-read humorists of the day.  In 1917, he produced The Man With Two Left Feet, a collection of stories which introduced Bertie Wooster and Jeeves.  His career, which also included success in musical comedy, the theatre, and Hollywood, was interrupted by World War II.  He was captured by the Germans in 1940, interned, and released, but not allowed to leave Germany.  After the war, he settled in America, becoming a citizen in 1955.  He continued to write prolifically until the end of his life, producing over 90 books.  He died at the age of 93, on Valentine's Day of 1975.

Mark Richard received his training at Northwestern University and in London.  He has been acting, creating original stage adaptations of literature, and directing in Chicago since 1982, joining City Lit Thetre in 1986. He served as its Artistic Director from 1993 to 2005.  He initiated the stagings of the Jeeves stories at City Lit, where they have become a traditional holiday favorite akin to the Goodman's staging of A Christmas Carol.  Two of the theatre's Jeeves scripts were revised and presented in radio productions, The Code of the Woosters (on Broadway as the Lloyd-Webber musical By Jeeves), and Thank You, Jeeves.  Mr. Richard has adapted, directed, and/or appeared in works by Raymond Chandler, Edith Wharton, Saki, Damon Runyon, Garrison Keillor, and Kafka, among others.  He has received three Jeff Citations and seven Jeff nominations (Chicago's Joseph Jefferson Awards).