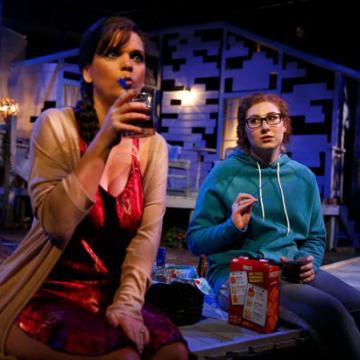 Dallas actors are adding Fort Worth to their go-to stages; theatergoers should, too Nancy Churnin, Dallas Morning News October 25, 2017

Stage West scored a hit with a previous Aaron Posner twist on a Chekhov classic, Stupid [Expletive] Bird, a contemporary riff on Chekhov's The Seagull in January.  It deserves another one with the witty and touching regional premiere of Life Sucks, Posner's contemporary spin on Uncle Vanya.

Under the deft direction of Emily Scott Banks, a terrific cast breaks down the fourth wall, moving their attention from audience to play and back, bringing home the funny mixed with the sad as characters yearn for who and what they can't have.

The patron sitting next to me on opening night didn't know Uncle Vanya and was swept up in Kally Duncan's vulnerable young Sonia, Cindee Mayfield's brittle, wise Babs and all the hapless men, from Jakie Cabe's dashing Dr. Aster to Mark Shum's flailing Vanya to Michael Corolla's officious Professor, who drive Sonia and Babs crazy by lusting after Sherry Hopkins' exasperated Ella.

Meanwhile, Sherry Jo Ward, who does a scene-stealing turn as the eccentric Pickles, can also be seen on Tuesday nights through Oct. 31 at Stage West's smaller studio space, performing her one-woman show, Stiff. This autobiographical, must-see piece, a hit at this year's Festival of Independent Theatres in Dallas, is the wry, true-life story of the actress' journey with Stiff Person Syndrome, a rare neurological disease.

Read the full article at the Dallas Morning News